Journalist, BBC Radio 4 (June 2020 – present)
Producing the World At One, PM, Broadcasting House and The World This Weekend.

Broadcast Journalist, BBC Sussex & BBC Surrey (September 2015 – May 2017)
Producer, reporter and newsreader, working on various programmes and delivering original stories to multiple platforms within the region. Output producer of BBC Surrey’s flagship Breakfast programme, playing a fundamental role in the station’s coverage of key stories such as the Southern Rail dispute and airport expansion, and breaking stories such as the EU Referendum result. Digital: Social media rep, representing the station at BBC English Regions workshops and conferences, and sharing skills and best practice with colleagues. Sport: Additional work with the sport team as a commentator, reporter and producer, playing a key role in the station’s coverage of Brighton & Hove Albion’s promotion to the Premier League. Recognition: Nominated by the station for the Radio Academy 30 Under 30 Class of 2016. 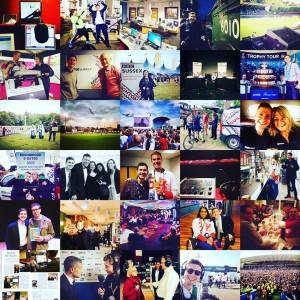 Freelance Assistant Producer and Reporter, LBC (May 2015 – July 2015)
Supported the output producer by screening calls, texts and tweets, developing and steering the discussion. Conducted research and provided editorial material for the presenter as appropriate.

As part of LBC’s ambitious coverage of Election Night 2015, I made my first appearance on live national radio reporting from the Hampstead & Kilburn count.

Freelance Broadcast Assistant, BBC WM 95.6 Sport (February 2015 – May 2015)
While studying in Birmingham, I began working at BBC WM on weekends and bank holidays. I provided the programme’s producer with information and technical support, managed the social media channels and turned around creative highlights packages in a short timeframe. The role required me to have a good knowledge of events and understanding of sports broadcasting, as well as a technical grasp of the RadioMan editing software and the ENPS newsroom system.